Sorry Mr Branson, but that is NOT how you build culture. 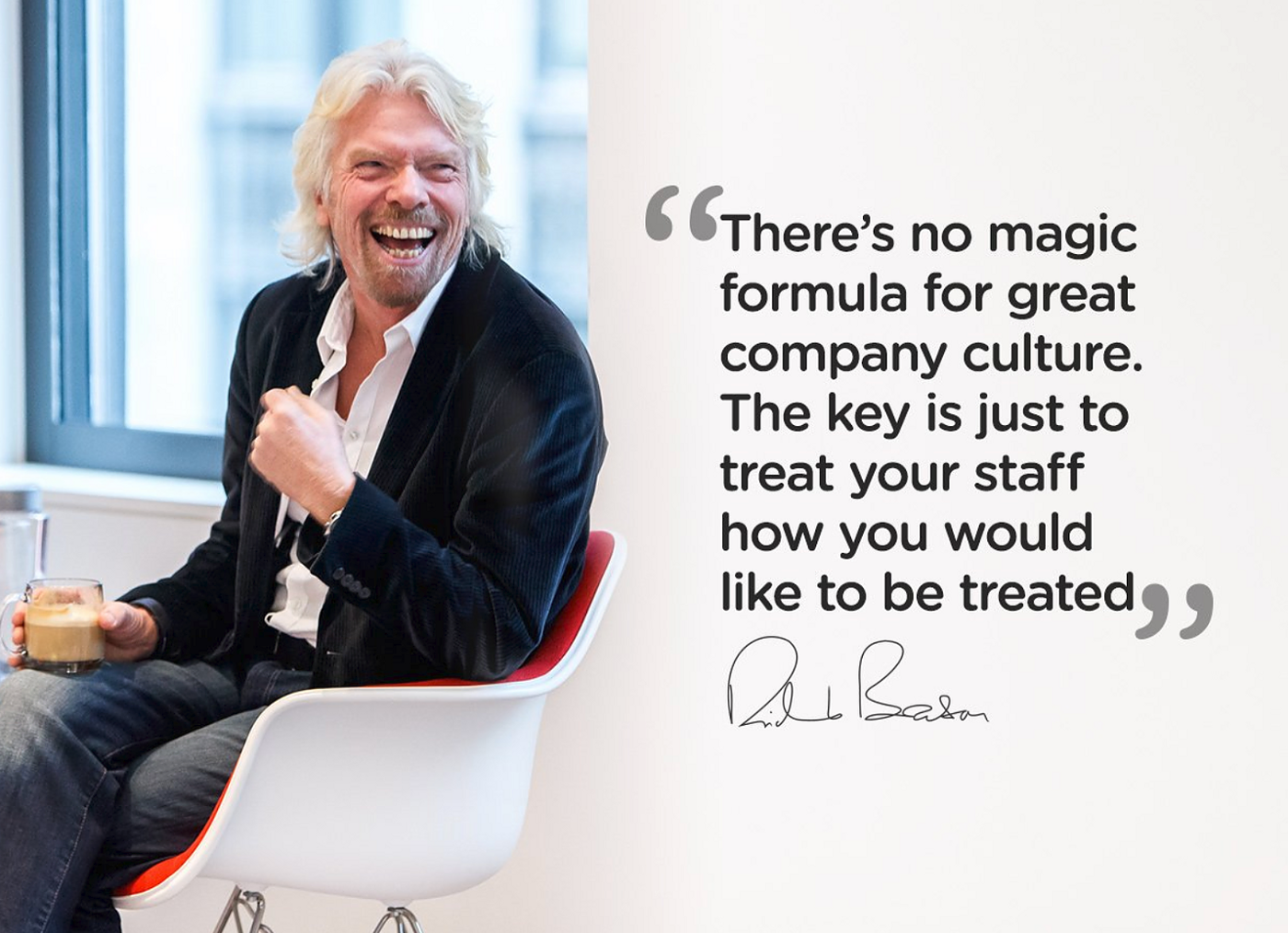 Sorry Mr Branson, but that is NOT how you build culture. Don’t get me wrong, Dickie B has accomplished some pretty amazing things during his career — no one can fault his entrepreneurialism, he owns an island for christ sakes — but you could not pay me enough money to work in an organisation where the CEO or Founder built a company culture purely based on what he or she likes. Why? Because that means the leader is assuming that all of their team thinks, feels and works exactly like them. Which is both arrogant and absurd.

Now, perhaps Richard Branson didn’t really say this (I’m sure if you’ve got an island, you probably also have a PR team), perhaps he did. But I saw this quote being shared by a startup CEO on LinkedIn and was immediately filled with dread. I can just about get over one founder of a HUGE conglomerate possessing this opinion, but when I see founders of startups/scaleups sharing this belief as if it should be taken as read — then I get worried! If I were to remix this message, it would be this.

“There’s no magic formula for great company culture. The key is to remember that your team is made of PEOPLE. And those people are individuals with varying ideas, ways of working and motivations.”

What this comes down to, is this…

How do you create a team who are super motivated, engaged and really high performing, and a culture which supports that?

The answer is never one size fits all, but by creating a culture that is based on exactly how you, the founder, would like to be treated, you are essentially narrowing your talent pool and limiting the amount of people who can succeed within your business. Hiring in your own image means a serious lack of diversity, inevitable blindspots and a culture where innovation grinds to a halt because no-one’s bringing new ideas to the table. It leaves you unable to hire people who change and add to your culture.

I’ve seen this within businesses, and witnessed it first hand. As a dancer many years ago, we were all frequently told that we were not good enough, not strong enough, too fat (the list goes on!). This was intended to motivate us to push harder, eat less — in reality, it had the desired effect on about 5% of us, and left the remaining 95% crippled with anxiety, completely unmotivated and frequently injured. It was disastrously naive of our ballet coach to assume that the punishing attitude that once motivated them would work on everyone else.

So how do you create a culture which does value individual perspectives rather than assuming one size fits all?

… is really the future of People & Culture. Amazing designers create with the needs and feelings of their audience top of mind, and are conscious of their own biases. It’s all about empathy — a good designer recognises that something which resonates highly with them, won’t catch everyone else’s eye as well. They will however, try to walk a mile in the users shoes, in order to understand what that person cares about, what their challenges are, and so on.

If you’re not collecting insightful feedback regularly from your team, you can’t expect to build a culture that really benefits and motivates the people within it. Start off with an engagement survey that looks deeply at the 360 experience someone has within your company. This will help you genuinely understand what you’re doing well and what you’re not, as well as giving you some great stats to track over time. More importantly, it will give you a basis from which to jump into conversations with your team about what motivates them, what benefits really benefit them and what part of your vision, mission & culture engages them. And the bonus? If you prove yourself willing and able to receive the feedback, you’ll start to create that mythical feedback culture everyone’s always talking about.

A 17th Century English author named John Donne said that “No man is an island.” A 21st century group of People & Culture enthusiasts called Unleashed say that no CEO or Founder is either.

We no longer live in an age where the Founder/CEO sits in an office in an ivory tower, calling all the shots (thank GOD). But day to day, we need to make sure that founders aren’t isolating themselves in order to ‘solve’ the Culture question. Culture is not static. It’s continuously evolving and it’s made by everyone. Culture is individuals embracing and living your company values and line managers role modelling the right behaviour, who support and empower their team. It’s how we coach individuals to fulfil and exceed their potential and it’s how teams collaborate on projects to drive the company forward.

It’s many things. But one thing it isn’t, is one person at the top of the food chain dictating a company culture based on their own preferences and motivations.

This post is about way more than Richard Branson. It’s about founders, leaders, managers and individuals embracing a more modern approach to building company culture; one that starts and ends with every single person within the business.

Although I still think Dickie B has some catching up to do ;)