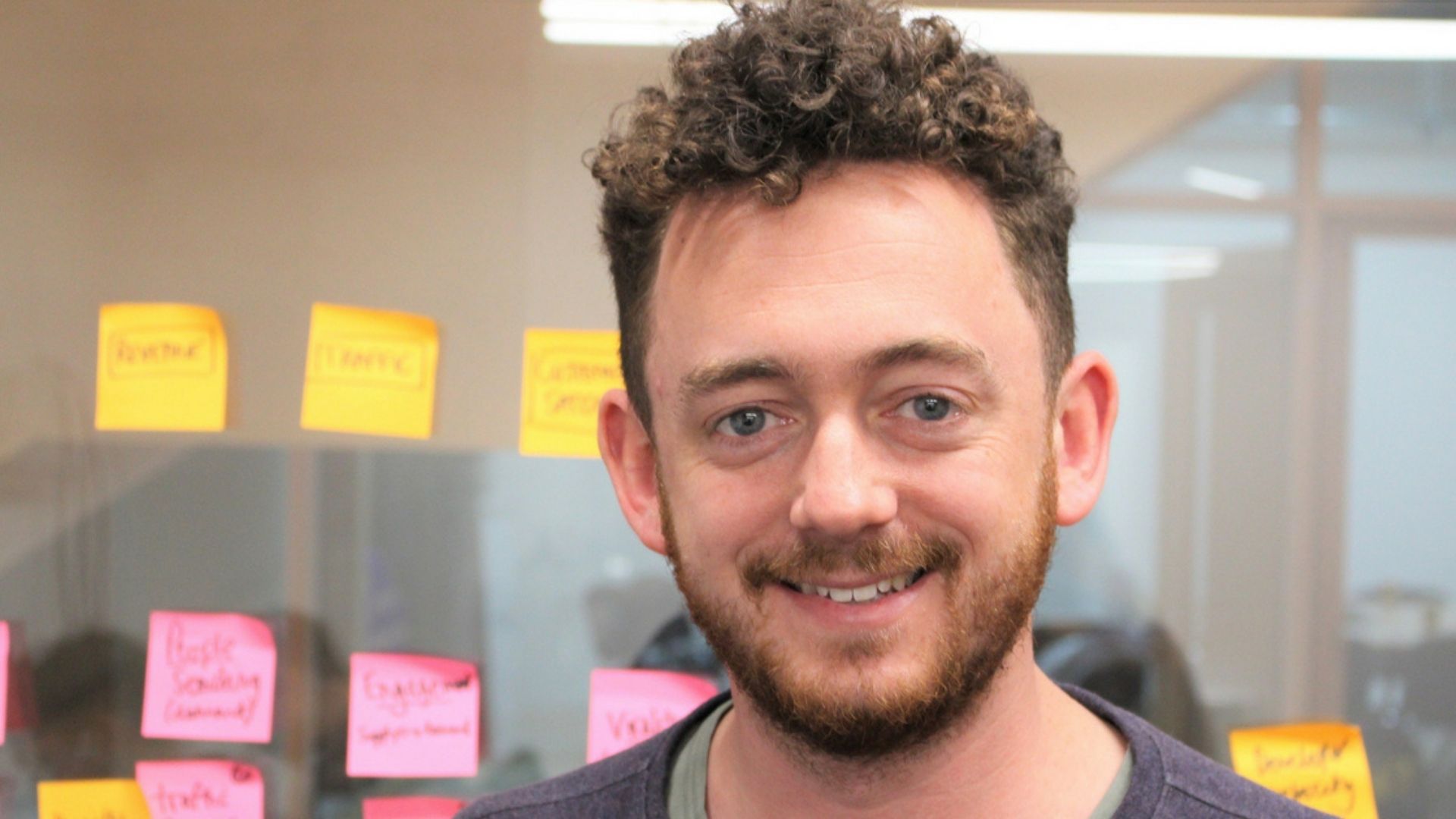 It'd be great to hear a bit more about how Graze was born… It’s rather unique in that so many different co-founders were involved. Can you tell us about the journey that you went on and how it came to be?

So it was back in 2007 that we all met, and it was originally the idea of a man called Graham Bosher, who had been one of the founders of LoveFilm.

So the story goes: he was sitting in his office, fed up with the unhealthy food options that were available in the industrial estate he was working. And he thought “Why don't we start a business sending healthy meals to people in their offices through the post in a subscription way?” A bit like LoveFilm had done for DVDs.

And he gathered a group of 6 others, 7 co-founders in total (myself included), to quit their jobs and move to London to start it with him. We were based out of Graham’s flat in Kingston for the first year or so. I was actually the last of the 7 to join, and I joined initially to build the website and work on the tech side.

And you ended up staying on as co-founder for about 10 years right? Did the other co-founders all move on at the same time?

I left March 2017, so about 9 and a half years after we first met. It was quite a big taboo, really, even talking about the prospect of any of us leaving. And we actually all ended up leaving at different times.

Some of the co-founders, like me as the “web guy”, had very clear roles. Some of the others had classic founder roles where they did a bit of everything. In 2013, we had a private equity buyout which was a really exciting point in the Graze journey. They formalised the management team, and there was a very natural path for me to officially become the CTO, but it wasn’t so clear for all of the other co-founders.

The guy who left first was probably the one who had the least clear role. He was an absolute legend, genius and an incredible business person. But as the business got bigger it just felt like there was less and less of a fit for him.

I can't remember exactly how the news was broken, but it didn't feel like a big surprise by that point. And after he left he was still a huge supporter of the company and very much in touch. He left to help start Tails.com, and we all got involved with that either through investment, or through advisory stuff, so we all still felt very connected.

The rest of us stayed at least another few years through the rest of that post private equity period. We’d just launched in the US, the retail launch was coming, there was loads to do and it was really exciting. And most of us had retained most of our shareholding in the company too, so it made sense to kind of stick around and keep trying to build that value.

So what was the push for you to leave in the end?

As the company got bigger and bigger and the management team became more formal, it felt like it was becoming more and more of a burden if i’m honest.

My role started to become less entrepreneurial and less techy, and more focused on doing whatever a private equity board want their management team to do, which was quite intense and I started to lose the joy of my job.

So I had a conversation with our CEO and said it was time for us to find a successor. He was very supportive and we started looking for a new CTO at that point, and agreed I’d stay to do a handover with them. It actually ended up moving quicker than expected as we found someone quite quickly, and I left around 6 months after that first conversation.

And how did it go down with the team?

I think there's always a lot of “Oh, wow, what does this mean? What do we do?” but I think it was managed reasonably well in that it was very clear that we had a succession plan.

We involved the team in the hire of the new person, and made sure there was a good amount of handover with them before I left. It in no way felt drastic or sudden to anybody.

Were any of the founder exits taken badly by the team?

I remember one in particular was tricky because he was incredibly popular, very energetic and charismatic. He’d had all sorts of different jobs across the company over the years, he was an amazing operator and got loads of stuff done, but never really had a clear role.

When the company got more established and there were proper teams and processes, he was the one who didn't really have a home in the same way.

So when he left, that was probably the biggest shock for the team because I think he was just really liked and was a real symbol of our culture as well. When you thought of Graze’s culture you’d think of him.

But luckily, it didn’t really take long for the team to bounce back afterwards. We’d hired a team to match the culture that originally came from him so we were able to keep it alive after he left. I guess my personal opinion on people leaving is that everybody always thinks it's going to be a lot worse than it actually is when it happens. Even co-founders, or really critical engineers who people think of as the oracle on certain systems, I always think it's amazing how quickly the joints readjust and you figure this stuff out after they’ve gone.

And to be honest it would be worrying if it did take a long time to adjust, because it would suggest it was not particularly healthy being overly-dependent on that individual. So I'd almost question if the culture was in a good place in the first place, if one person leaving had that much of an effect.

And I also believe, fundamentally, that it is healthy for an organisation for people to move on, especially when there isn't a clear role for them.

Do you think you left at the right time?

If anything I could’ve left a little earlier. I don’t really have regrets because it was a great time at Graze, but I think I should have recognised sooner than I was missing the entrepreneurial stuff and the tech. But… If I had left sooner, I’m not sure I would’ve realised how important it would be to take some time off.

When you left Graze, how did it feel and then what did you do next?

Euphoria, honestly. I loved Graze, but it was more this feeling of a world of opportunities being available to me and just being able to kind of take my time to enjoy that feeling of having no responsibilities at all, nothing to do, no emails to answer, no meetings to attend, nothing on my to do list. I remember thinking, “Oh, this is fantastic”.

It's a particular period of my life which I often yearn for again. I didn't really do anything for a couple of months. I just had a couple of holidays and enjoyed pottering around.

And then one of my old investors from Graze called me up, who was someone I'd become quite friendly with, and said there was a startup in his portfolio whose CTO had left and he needed someone to come in and help the team out. He convinced me to do 2 days a week on a consulting basis, which I thought sounded good.

Then that led to another and another and I ended up with 3 or 4 consulting clients and I then continued with that life for about a year. This enabled me to work out what I wanted to do next as I was working in different types of roles in different industries. And I realised I wanted to be at the beginning of something again.

During that time I ended up meeting my now co-founder of my current venture Tiney.co - a platform to help people start micro-nurseries from their homes. Our aim is to enable affordable childcare for parents, as well as providing high quality early education for kids, plus amazing careers for childminders. It took us 6-9 months to raise money and kick things off with Tiney, and we’ve been going ever since.

What do you think you’ve gained since leaving Graze?

More than anything else, I’m loving a brand new challenge in a completely new sector. And getting right back to the start in terms of tech: building random things and testing ideas and hacking bits of data together, which has been really fun. Building our first app, hiring our initial team. Being in the front seat for fundraising negotiations with VCs.

Coming out of Graze with so many different co-founders, I also concluded that I wanted to have a proper co-founder relationship and proper meaningful ownership of something next time.

So now 5 years on, are there any lessons that you would want to share with other founders about what you’ve learnt?

I’d say try not to let it be a taboo. If you feel like it's the right thing, or your time has come, or your job is done, or the role you’re playing has changed, or you're not adding the value you used to, then do not worry about the taboo. Make it happen. It will be good for you and good for the organisation in the long-run.

And then the other big one is don't do it knowing what you're going to do next. It’s so important to get that time in between to decompress and reflect.  Time and space is a really, really important thing for perspective. I think I would be in a completely different position now if I’d decided what I was going to do before leaving Graze. I could easily have ended up taking on a CTO role in a bigger company next and I just don't think I would’ve been happy. Only make that decision with some time first to decompress.